Sep 26,2019 Comments Off on The chocolate self-delusion Behavioral Principles

Behavioral insights into intertemporal choices, self-control issues and the virtues of commitment

Last week, we identified time-inconsistent decision making as the main reason for our chocolate issues.  We will now look into it in a bit more detail.

Behavioral economists group people with respect to the extent of how much self-control problems they exhibit and their awareness of these problems. 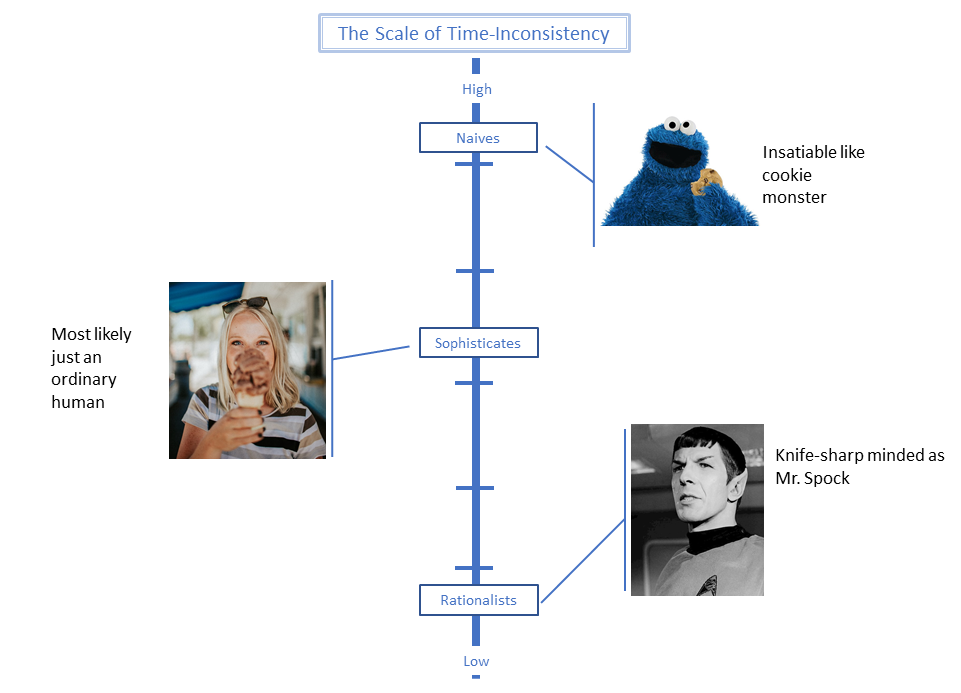 Chances are good that our test has shown you are a somewhat sophisticated person. Most of us have enough self-awareness to know that there are temptations which will test our self-control. We also know that we sometimes change our choices as time goes on.

However, most of us are usually not that good in estimating how much our choices will change.  This tendency of people to underestimate the extent to which their future tastes will deviate from their current ones is called projection bias.

When we stand in front of all different kinds of chocolate in the supermarket, we have this gut feeling that our good intentions for responsible chocolate consumption will vanish at some point in time.

A typical inner monologue would be:

“Today and tomorrow I only want to eat two pieces, but maybe I will lose track after that and eat a piece more… But I definitely won’t eat the entire bar at once! Surely I can make it last three days…”

But guess what? It’s not going to last three days.  Shopping chocolate and thinking about the optimal daily amount of chocolate consumption is done in a cold state. In the supermarket, we are controlled and not excited. A few hours later however, our state is different. We are hungry and yearning for something that pushes us through the afternoon sleepiness, which is a typical hot state. Our preferences will be altered when context changes, and the larger the gap between the two statuses, the larger the change in preferences will be.

In contrast to naifs, sophisticates may predict this hot-cold empathy gap but still underestimate the magnitude. We know that we will not fully stick to our plan, but we do not foresee how fast we will fail to comply with it. In our case, we might start with eating two pieces of chocolate, but will probably eat another three shortly after, and then, much quicker than anticipated, all bets are off and the chocolate is gone, running counter to our long-term preference to eat healthier.

In Part 3, we show you ways how to deal with this sort of issues.

Julia Hafenrichter is currently completing her master’s thesis on the implementation of Behavioral Economics in Public Policy at University of Passau.

Julia Stauf is Director at BEHAVIA and holds a PhD in Behavioral and Experimental Economics from Cologne University.