A purely rational view on how forced migration ‘should’ be managed

Feb 4,2019 Comments Off on A purely rational view on how forced migration ‘should’ be managed Grand Challenges

Let’s be honest. Why should we care about intangible global goods like climate change, international security or global market stability? Whatever we or our governments do, we will not be able to turn the world into a better place on our own. Of course, we would appreciate the provision of such goods; praise the one who would shoulder the burden. After all, we would acknowledge that global public goods are preconditions for economic prosperity and sustainability. But let us face the facts: we live in autonomous states with national interests and societies, not in a global village. And, even more important, none of us could ever be excluded from the gains arising from economic or social stability. So why should we agree to any of these global deals? There is nothing to win. Why should far-away Europe, for example, host Syrian refugees when Jordan or Lebanon are the natural candidates?

If you think this way, you are definitely a very rational person, reasoning completely in line with classical economic theories of man. But before dismissing the compacts’ ideas right away, let’s think through all the consequences. If we assume everybody thinks the same way, no government would have an incentive to contribute to hosting refugees. In that case, however, we would be confronted with some delayed consequences: if Jordan and other countries of first asylum were to host all Syrian refugees, these countries would be financially and socially overburdened. At some point, they would become incapable of shouldering the costs. Without external support, they would fall apart, nurturing further destabilization of the Middle East. Besides Syrians, also Jordanians and Lebanese would then start seeking asylum or economic perspective abroad, mounting to an even larger wave of refugees. Who would be next? Probably Turkey, then Greece, after that Bulgaria. The wave would grow and spread, flooding country after country leaving fallen states and lost generations behind.

So even if we say humanitarian aspects don’t matter in a strictly rational calculus, we would still want to see governments take actions in order to prevent a scenario in which millions of people knock at our doors. What is it that our governments should do? Probably we can all agree that they should wisely spend our tax money to the best of our interest, i.e. do something to ensure stability using the most efficient approach.

That is more or less what Western governments have tried by signing up to the different global compacts. They have tried to establish institutions and global standards to manage (forced) migration. This is true particularly for the European case where governments also signed a series of bilateral treaties with countries of first asylum in the last years. In simple terms, all these treaties follow the same logic of ‘we pay, you host’. While this is generally in line with the rationalist’s view, there is one fundamental flaw in all these bilateral deals: they are inefficient.

In economic terms, some countries were able to leverage their monopoly positions; others with lower bargaining power remained systematically underfunded to guarantee long-term domestic stability. On top, it is quite arbitrary how many refugees are hosted by a country. Probably some countries are more capable of providing host capacities than others but this issue has never been addressed in bilateral negotiations. So the key question is how can these deals ensure that only the most capable countries are financed and that the right amount of money is transferred?

A market for hosting capacities

From a rational point of view, the global compacts provide an excellent starting point to answer these questions. With a standardized service, the hosting of refugees according to the compacts’ definitions, we can rely on the most powerful mechanism to distribute costs and allocate capacities: a market.

Remember the Kyoto Protocol(s) and today’s emission trading? A rational perspective would tell us to apply exactly the same logic when it comes to hosting capacities of refugees. Below are some features of a market mechanism designed in order to produce an efficient outcome:

First, governments would need to agree on a dynamic allocation key. This key would determine a quota per each country defining for how many registered refugees it needs to provide host capacities. It should be linked to some meaningful economic indicator, for example, a country’s GDP. The good thing about a dynamic key is that it would automatically adjust to the tides. Regardless of whether more or less people seek refuge, we wouldn’t have to worry about which country is taking the extra burden or which country is being relieved as the key would dynamically re-assign quotas based on the total numbers of refugees.

Countries of first asylum have typically low economic power. The key would thus determine that they would have to provide a relatively modest amount of hosting capacities. Countries with stronger economies, in turn, would have to meet higher quotas. For example, let us assume for a moment that the allocation key would assign quotas of 1.6% (~ 1,100,000 people) to Germany and 0.1% (~ 100,000 people) to Jordan.

Once hosting capacities were assigned to all countries participating in the market, one would assess the degree of fulfillment, i.e. determine the actual gap between the assigned quota and the actual number of refugees being hosted per country. Countries of first asylum would probably over-fulfill their quotas (at least at the beginning), while countries with stronger economies and relatively small numbers of refugees would under-fulfill their quotas. In our example, Jordan currently hosts roughly 700,000 registered refugees, i.e. a ‘surplus’ of 600,000; Germany hosts nearly 1,000,000, a slight ‘deficit’ of 100,000 according to its quota.

With these options, the mechanism would start to balance capacity supply and demand: most countries of first asylum have lower financial and social costs for providing hosting capacities. These countries would have an incentive to offer their surpluses at competitive rates at the market place. Many richer countries, in turn, would incur higher costs for hosting, e.g., due to cultural frictions, social or religious concerns, language barriers, etc. They would be willing to approach the market place and pay another country for offering hosting capacities. For example, there are estimates from 2016 stating that hosting one refugee in Jordan costs US $ 3,000 p.a., whereas hosting in Germany costs about US $ 30,000.

It is straightforward that an alternative solution would neither be feasible for the German nor for the Jordanian government as both would incur higher (opportunity) costs if 100,000 Syrian refugees would have to be re-settled from Jordan to Germany. This process would continue until all deficit and surplus capacities are cleared, that is either traded through the market or provided at home if this would be less costly compared to the market solution. As the example illustrates, the most probable outcome would be that countries of first asylum would receive direct transfers from Western countries for providing shelter to refugees. By definition, there wouldn’t be much trading in times of stability. But in times of crises, this market would become quite active. In sum, the key advantage of the mechanism compared to the current system is that refugee hosting capacities would be provided in an efficient manner, i.e. at competitive market rates and only to the most capable countries of first asylum.

Moreover, the mechanism would not only ‘manage’ forced migration efficiently. It would also set incentives for both host and donor countries alike to improve compared to the status quo. Countries which can offer capacities at competitive rates would not only ‘sell‘ their capacities at sustainable prices, they would also have an incentive to expand their capacities as long as the market price is higher than their costs of providing additional hosting capacities. On the other hand, countries with a national interest to pay rather than to host would happily cover the minimum costs for hosting in other countries according to market rates, satisfying both their burden-sharing obligation and their populations’ resentments . And again, all countries could deliberately and autonomously decide on whether to host, pay or mix both variants, as long as they would be committed to take their share according to the key.

The market for hosting capacities is an example of behavioral economic engineering which follows a strictly rational mind set. It exemplifies how behavioral insights could help to address today’s global challenges by changing perspectives and analyzing underlying incentives.

BEHAVIA advocates for empowering competition to create better outcomes and effective solutions for the grand challenges. If you would like to learn more about the design proposal fora refugee hosting market and/or would like to solve similar societal problems, please get in touch with us. We are always interested in collaboration and exchange of thoughts.

1 Btw, do you know what Germany is currently paying to Jordan? Me neither. But at least the transfers of the German Ministry for Economic Cooperation and Development amount to US $ 340 Mio to Jordan p.a., leaving aside any other payments from Germany to other countries of first asylum. 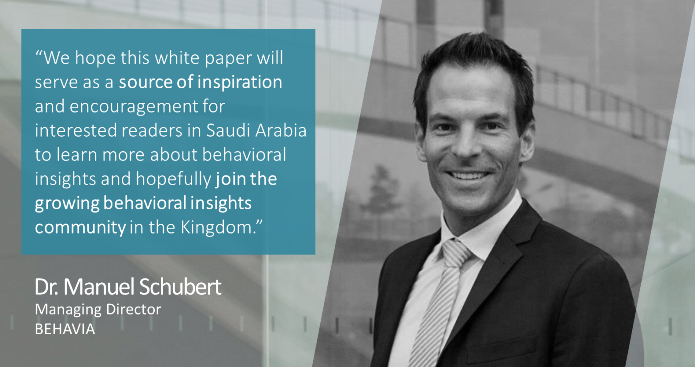 In this white paper, we introduce the key concepts of behavioral public policy and discuss how behavioral insights can help to achieve Vision 2030.